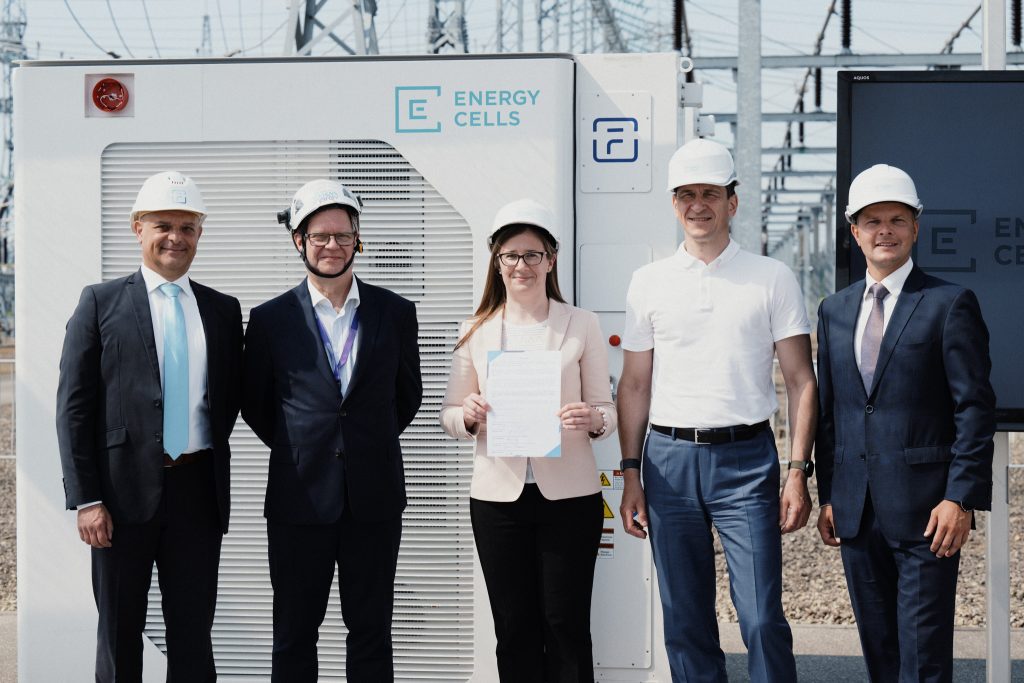 On Wednesday, Energy cells, the operator of the energy storage facility system, started the installation of the first battery parks in the Baltic States with the burial of a symbolic capsule. Preparatory construction works have already started in transformer substations in Vilnius, Šiauliai, Alytus and Utena and the majority of energy storage units for the system have already reached Lithuania.

Energy cells, a company within the EPSO-G group of companies, will install the four battery parks and integrate them into the Lithuanian energy system by the end of this year. The company will then start providing an instantaneous isolated standby power system service. Once synchronised with the continental European grid, the system will contribute to the rapid integration of growing renewable energy sources by being able to store energy from solar and wind farms and feed it back into the grid when needed.

The Minister of Energy Dainius Kreivys says that the project marks a new qualitative level of grid resilience and will help Lithuania meet one of the most important pre-synchronisation challenges – the ability to independently operate in isolated mode.

‘The construction of these facilities will help ensure the stability and reliability of our electricity system in the event of disturbances, both on the continental European grid and in independent operating mode’, said the Minister. ‘The war in Ukraine has once again demonstrated the need for full energy independence, and with the beginning of installation of the batteries we are witnessing the beginning of yet another important phase for energy independence. We are ready for any action against our electricity system.’

The 87.6 million euro funding has been allocated to Energy cells for installation of an electricity storage facilities system under the EU‘s Recovery and Resilience Facility (RRF) NextGenerationEU plan called New Generation Lithuania.

‘A year ago, the European Commission approved the Recovery and Resilience Plan for Lithuania, which provides EU funding for Lithuania’s economic recovery, innovation, green and digital transformation. The construction of an energy storage system is one of the first projects under the plan to be implemented in Lithuania. It will strengthen Lithuania’s energy independence and security at this difficult moment in time, when Russia is using energy as a hybrid weapon against the whole Europe, while contributing to climate change mitigation goals. This European-scale project is a perfect example of tomorrow’s energy and has strategic importance for our region’, said Marius Vaščega, the Head of the European Commission’s Representation in Lithuania.

‘It’s been exactly a year since Ursula von der Leyen, the President of the European Commission, visited this place. She began her speech expressing a sincere wish for the 200 MW battery system, which would ensure energy stability of the Baltic States and subsequently integrate the green energy, to be timely installed. It is rather symbolic that exactly a year after we mark an actual beginning of the President’s wish – the beginning of construction works stage’, – said Rimvydas Štilinis, the Head of Energy Cells.

‘Despite challenges brought by the current geopolitical situation in Europe and the impact of a still present global pandemic, the majority the equipment, including Fluence Gridstack storage products, have been already delivered in accordance with the project schedule. The progress of the project is a credit to collaborative work of all stakeholders involved, their dedication and commitment to increasing the resilience and stability of the Lithuanian grid. Fluence and Siemens Energy are proud to be a part of this initiative, and we are looking forward to the successful completion of the project’, said Michael Gillessen, Fluence Managing Director and Vice President EMEA Delivery during the event.

100% of shares of Energy Cells, which was appointed as the energy storage facility system operator, belongs to the EPSO-G energy transmission and exchange group of companies. The rights and responsibilities of the sole shareholder of EPSO-G are implemented by the Ministry of Energy of the Republic of Lithuania.